Impact of the Moon on Dark Skies 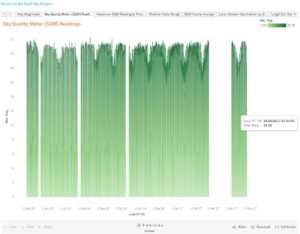 Regular periodic drops in darkess attributed to the regular phases of the full moon every 29.53 days.

Even through Lough Gur is fortunate to be located in an area with such wonderful dark skies, the data from our light meter had periodic drops in darkness. Regardless of the weather, seasonal or any other influences these periodic spikes in brightness are attributed to lunar phases – the full moon.

On focusing on any given night you do not seem a smooth transition of brightness to dark. On nights of a full moon, cloud cover will darken the skies marginally.

Interestingly on a dark night, the overhead cloud has the impact of bouncing ground lighting back to earth and our light meter.

What is a Super Moon and when do they happen?

The Moon’s orbit around the Earth is elliptical and as such it’s distance from Earth varies each month between approximately 357,000 and 406,000 kilometers. The point on the Moon’s orbit closest to Earth is called the perigee and the point farthest away is the apogee. If, when the moon is at perigee, and the lunar phase is a full moon, then you get a super moon.

The graph below is taken from our SQM Meter & Lunar Orbit Data. Scan your eye across the graph to see when the Moon is at its closest approach to the Earth (bottom wave line) and the luminosity is at it’s highest (top wave line). In 2016 there were three Super-moons, in October, November, and December – can you find them? 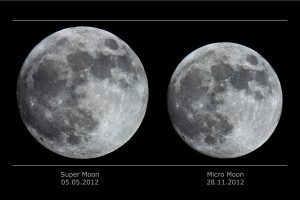 When you have a full Moon at Apogee (furthest away from Earth) then you have a Micro-Moon. According to NASA, when compared to a micro-moon, a super-moon is 12% to 14% larger and as a result is up to 30% brighter.