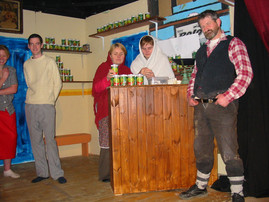 When pupils transferred to the new national school in 1966, a committee was set up to use the old school for community purposes. Other organisations grew from its availability – one being the dramatic society. It is now 40 years in existence and has produced lots of plays over the intervening period.

In the early years, we tended to move to surrounding halls to perform our plays but a decision was taken to upgrade the old school and perform only there. As part of a couple of refurbishments the name was eventually changed to the Honey Fitz theatre. Past productions have been numerous and include “Sky Road” by Jim Nolan in Feb 2009 and “Don’t dress for dinner” in April 2009, ‘Many Happy Returns’ by Bernard Farrell and “The Adventures of the Speckled Band” in 2012.

In the lobby of the theatre, there is a photograph of the late Tom McNamara, founder of Frdmember, actor and storyteller.